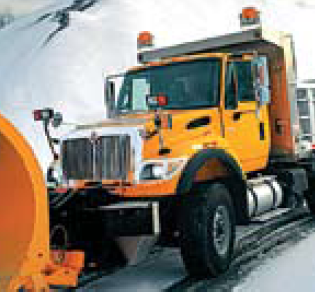 Superior plating results in better corrosion resistance, which in turn prolongs the useful life of a fitting and reduces its overall cost of ownership.

White corrosion, caused by zinc oxide formation, occurs first during normal use. Other than appearance, fittings showing signs of white corrosion still have adequate protection. However, the formation of iron oxide (red rust), signals oxidation and deterioration of the base metal, which may require replacement of the fitting.

In order to pass the current SAE requirement, a fitting must withstand 72 hour exposure to salt spray without showing any red rust. The proposed revised SAE requirement calls for extending the test period to 96 hours. Parker fittings exceed both the current and proposed new SAE corrosion resistance requirements.

The results of an independently conducted test are shown below. Testing was completed on the top six major manufacturers of tube fittings. The fittings where red rust appears are outlined in red. 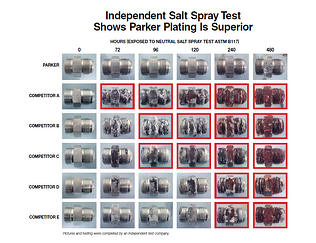 The rust resistant coating comes in handy in many demanding applications, such as snow removal, logging and construction.