The Differences Between AN and JIC 37° Flare Fittings

Over the years, we have received quite a few inquiries regarding "AN" fittings. AN (Air Force - Navy Aeronautical Standard) and AND (Air Force - Navy Aeronautical Design Standard) are standards used by the U.S. Military in aviation applications. AN fittings are manufactured to meet the above standards. These fittings include the 37° flare, flareless, hose connections, "banjo" type fittings, specialized flange fittings, pipe fittings, and other types of connections. There are many frequently asked questions about AN 37° flare fittings and how they relate to their industrial 37° flare counterpart, the SAE/ISO 37° flare fittings, so I thought I would share the background and differences between these fittings.
(Skip to The Differences Between AN and JIC Fittings)

Parker actually pioneered the flare fitting technology in the 1920s with the introduction of the inverted flare fitting followed by the Parker Triple Fitting in the early 1930s. They were adopted by the Air Corps, a part of the U.S. Army at that time, as AC-810 and AC-811. As the operating pressures increased, the inverted flare did not perform as well as the Triple Fitting, and its use started declining. The ease of manufacture of Triple Fitting provided additional advantages that resulted in its quick acceptance in various industrial and military applications. The Triple Fitting was a patented three-piece design similar to the current Parker Triple-Lok 37° flare fitting, except it had a 30° flare angle instead of the 37°. This fitting design was the forerunner of the current AN and SAE 37° flare fittings.

The U.S. Air Force, with help from Wright Patterson Air Force base, developed a fitting with 37° flare angle, before WWII, which became known as the "AN" fitting. This fitting had precision 3A/3B threads. The use of "AN" fittings proliferated from the 1930s through the 1960s to include most branches of the U.S. Military, Military Contractors, General Aviation, and Commercial Aviation. These fittings were even adopted for use in many land and sea applications of the U.S. Military as well, leading to confusion between AN and its industrial counterpart, the SAE 37° fitting. After the war, several versions of 37° flare fittings flooded the industrial market, creating a nightmare for the users. The Joint Industry Conference (JIC), an organization of manufacturers, decided to standardize on the "AN" design, except with 2A/2B thread class for ease in manufacturing. These fittings came to be known, throughout the world, as "JIC" fittings. The JIC wanted the prestige of SAE for the fitting standard. They convinced SAE to take on the task and helped in the development of the standard. Thus, the SAE standard 37° flare fitting became part of SAE J514 in 1950. The fitting became an ISO standard, ISO 8434, in 1986, replaced by ISO 8434-2 in 1996.

AN fittings remain prevalent today. However, the U.S. Military is canceling many of the true AN/AND standards and replacing them with Aerospace Standards (AS standards) developed, again, by SAE. Many aircraft/aerospace applications are moving towards aluminum and titanium components for optimized weight-to-strength parameters.

Differences Between AN 37° Flare and Industrial 37° Flare Fittings

There are several differences between "comparable" industrial 37° flare (SAE/ISO) and AN 37° flare style fittings. 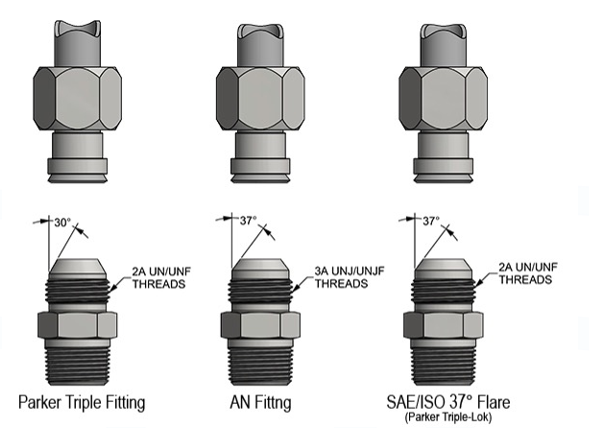 In addition to the above-noted differences, drop lengths, hex sizes, hex widths may also vary between "comparable" AN 37° flare and industrial 37° flare fittings in some sizes.


AN and JIC Fittings Interchangeability

Note: Parker Triple-Lok 37° flare fittings (or other TFD products) are not for use in Aerospace, General Aviation, Commercial Aviation, or Military Aviation applications.